Hit enter to search or ESC to close
DestinationHighlightLifestyle

By Editor11 November 2020 No Comments

Phuket – Thailand’s largest island – is a dazzling destination among local and international travellers offering a myriad of things to see and do. Enjoy the bliss of its spellbinding crystal clear Andaman Sea and witness at least once in your life those magical views of the sun going down the horizon many people swear by. Suss out the city steeped in history of cultural diversity in culinary, religion, architecture and way of life. The warm welcome and hearty hospitality of its people are always there to impress travellers.

Apart from access to the island by speed boat or ferry, you can also get there by car via Thao Srisoonthorn Bridge which links Ban Tha Nun in Pnanga and Ban Tha Chat Chai in Phuket. Sarasin Bridge, the first bridge connecting the island to the mainland Pnanga is now turned into a pedestrian bridge with pavilions for sightseeing. Phuket International Airport, located northwest of the island, serves as another gateway to the island. Despite being the largest island, Phuket is actually Thailand’s second-smallest province so getting around is easy. A car, a motorcycle, bicycle or even walking will do. 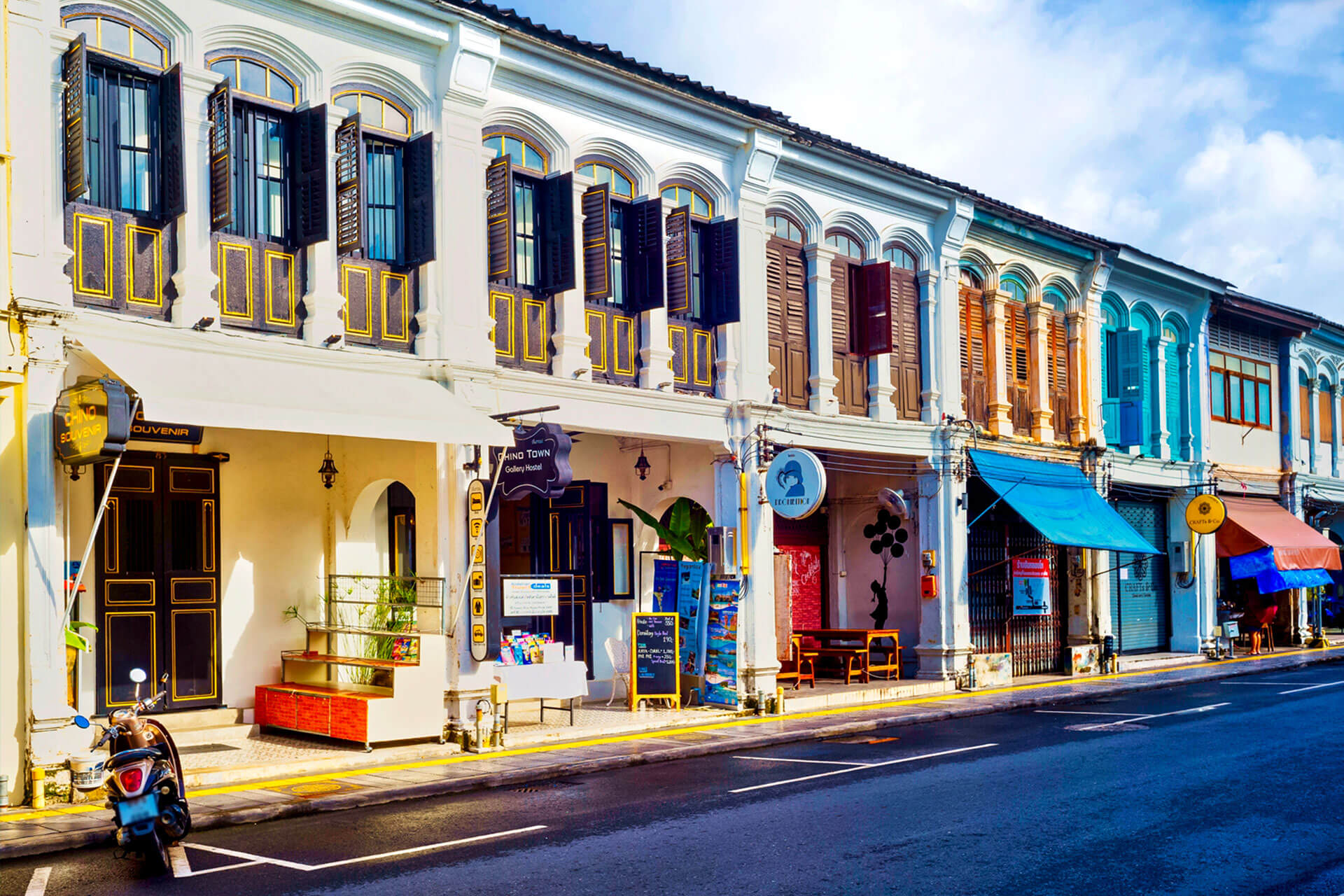 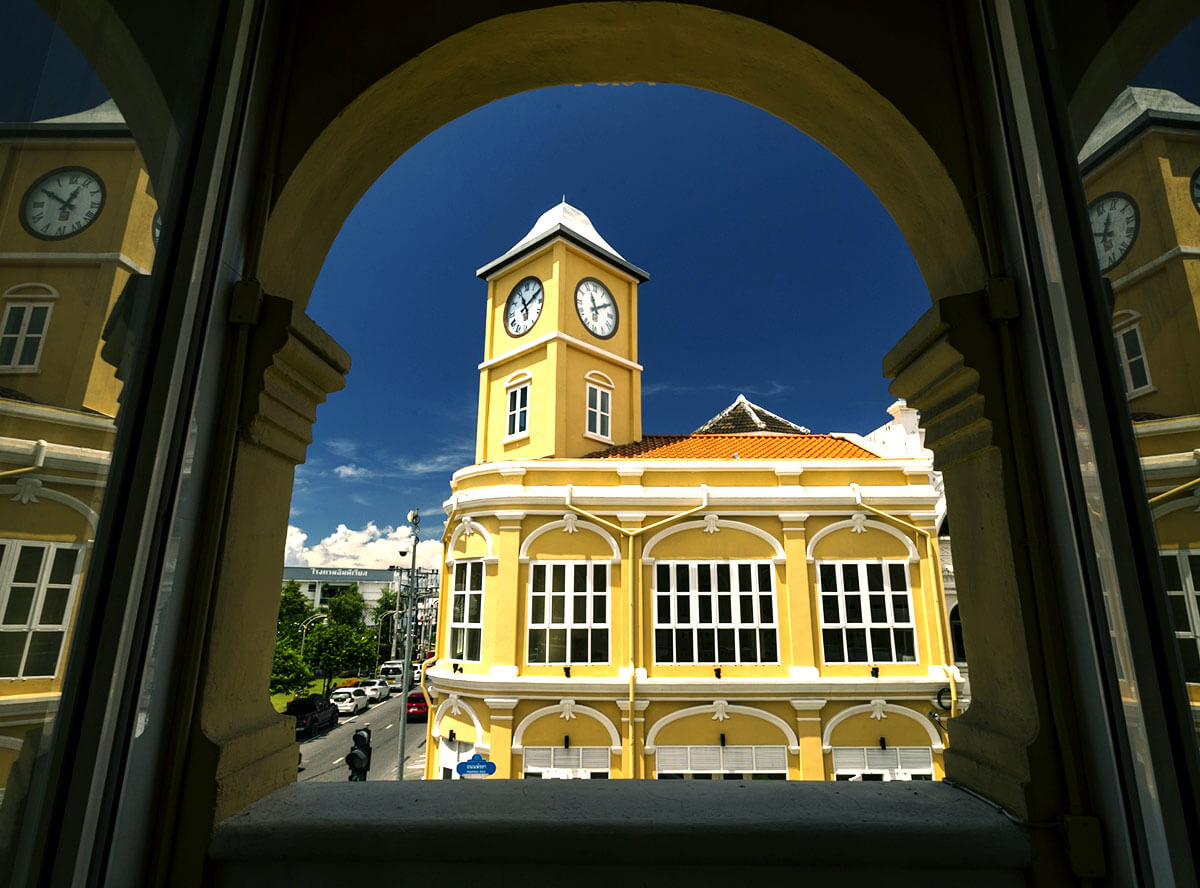 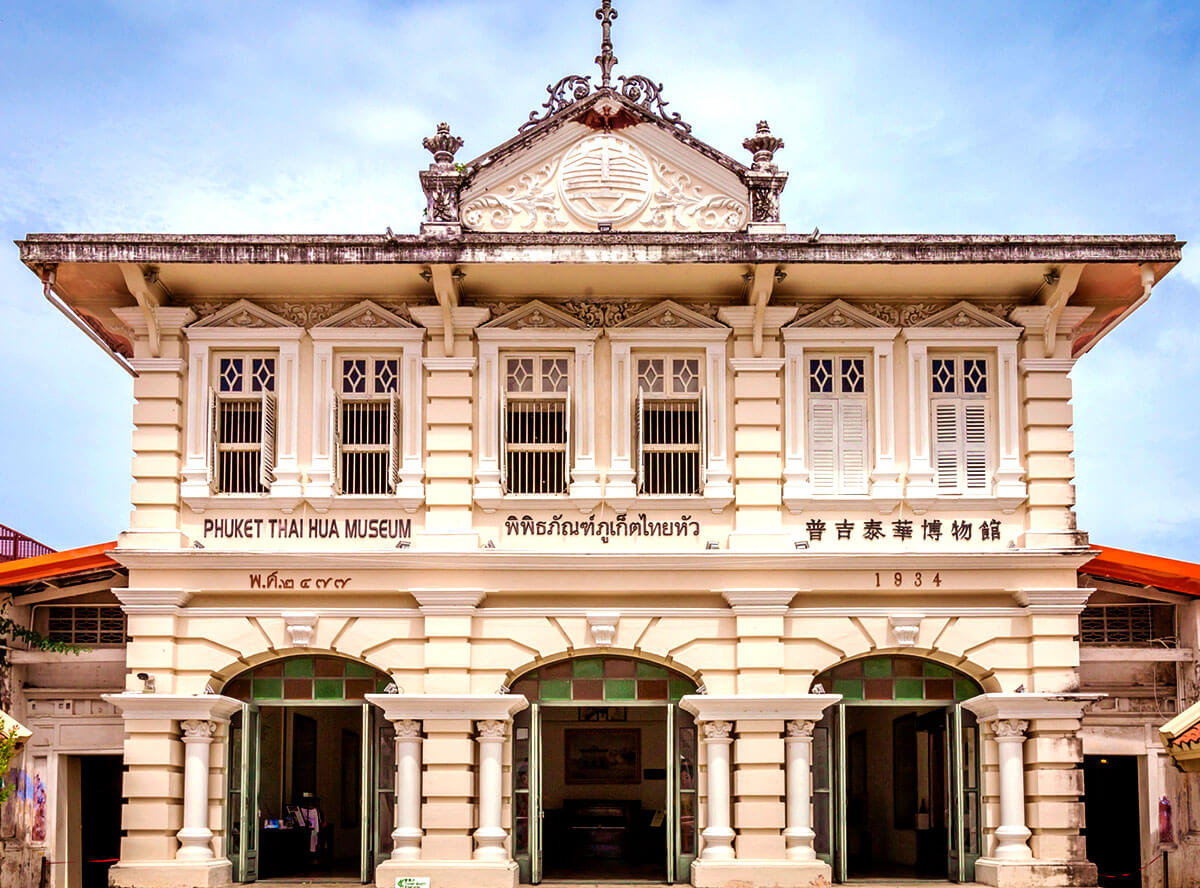 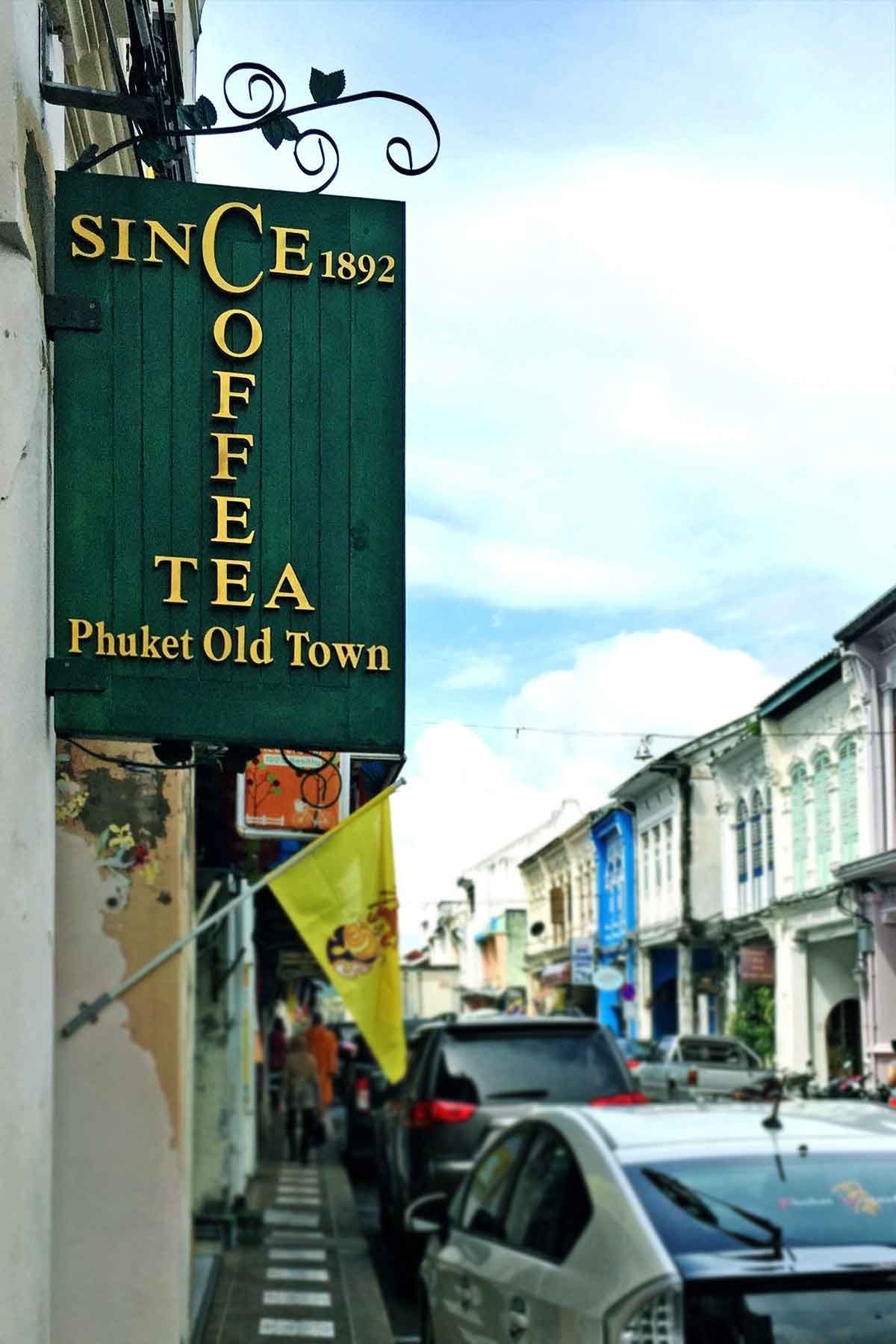 Phuket has a long-recorded history with the oldest historical archives being the city mentioned around 157 AD on the sailing map of Ptolemy, a famous Greek philosopher. The map guided the route from Suvarnabhumi Cape down to Malayu Cape which covered the Andaman Sea area making this island became recognised among sailors taking a journey between China and India through Malay Peninsula. The island was widely known during the age of imperialism when the west set sail in pursuit of new knowledge and led to overseas territorial acquisitions with a view to exploit their natural resources. Until now, western civilisation has left indelible marks which are still evident in cities along this route; Malacca, Penang, Singapore and Phuket

As the main trade emporium for several minerals, for instance, tin, ambergris and pearl, Phuket became a port with an influx of foreigners with a lot of art, culture and technology exchanges. The most remarkable was the Portuguese settlers who hired Chinese labourers to build houses and buildings in European style so those buildings did not turn out quite like the original when they spiced up the decoration with added motifs to reflect their Chinese beliefs. The result became this new distinctive architectural style; Sino-Portuguese architecture, which is prevalent around Phuket’s famous old town area.

To get to Phuket’s old town, just catch a shuttle bus straight from the airport. Recommended spots for the kitschy Sino-Portuguese sightings are Thalang Road, Dibuk Road, Yaowarat Road, Krabi Road and Soi Romanee. These areas are teemed with charming shop houses and mansions and people are still living there running businesses. You can park a car on the street side and walk around this selfie haven at your own pace with camera at the ready.

One of the hallmark Sino-Portuguese features is the archway at the façade of the building. It is referred to as Arcade in Thai and as Ngor Kha Kee in Hokkien which literally means “memorise the five-foot”. This concept of having a five-foot passageway away from the road to allow visitors to walk past was actually taken from Singapore’s town plan initiated by Sir Stamford Raffles in 1822.

Ngor Kha Kee echoes the wisdom of function-base design responding to the needs of the local perfectly. A tropical city such as Phuket, it rains virtually all year round. By having the five-foot arcade, they masterfully join shop houses together through this walkway allowing people to walk and get sheltered from the rain. The archway concept also shows how considerate the building owners are in sharing their own space for the common use of general. Phuket’s old town attract throngs of visitors with streets lined with plenty of good eats, great cafés, plenty of souvenir shops and funky street arts. 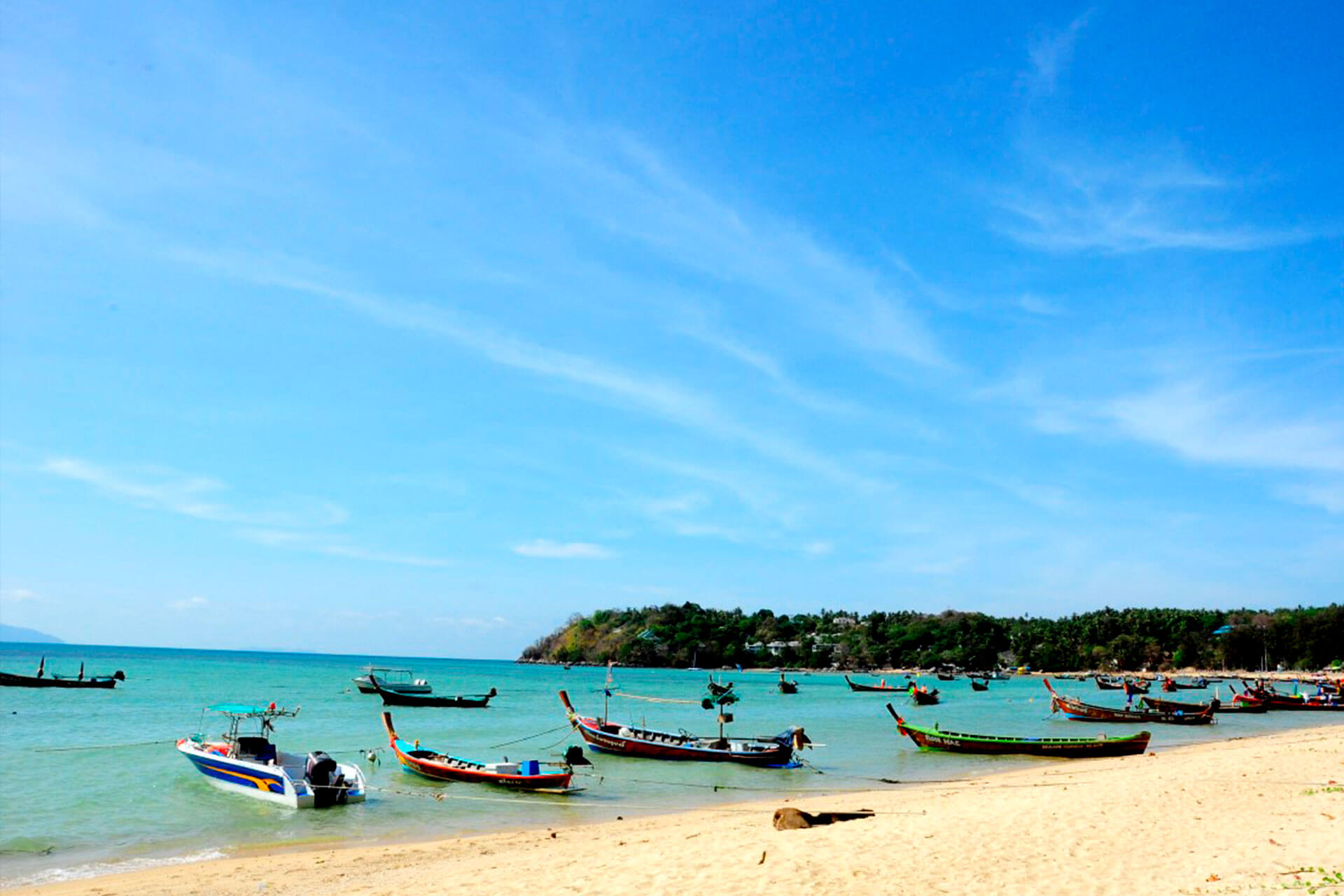 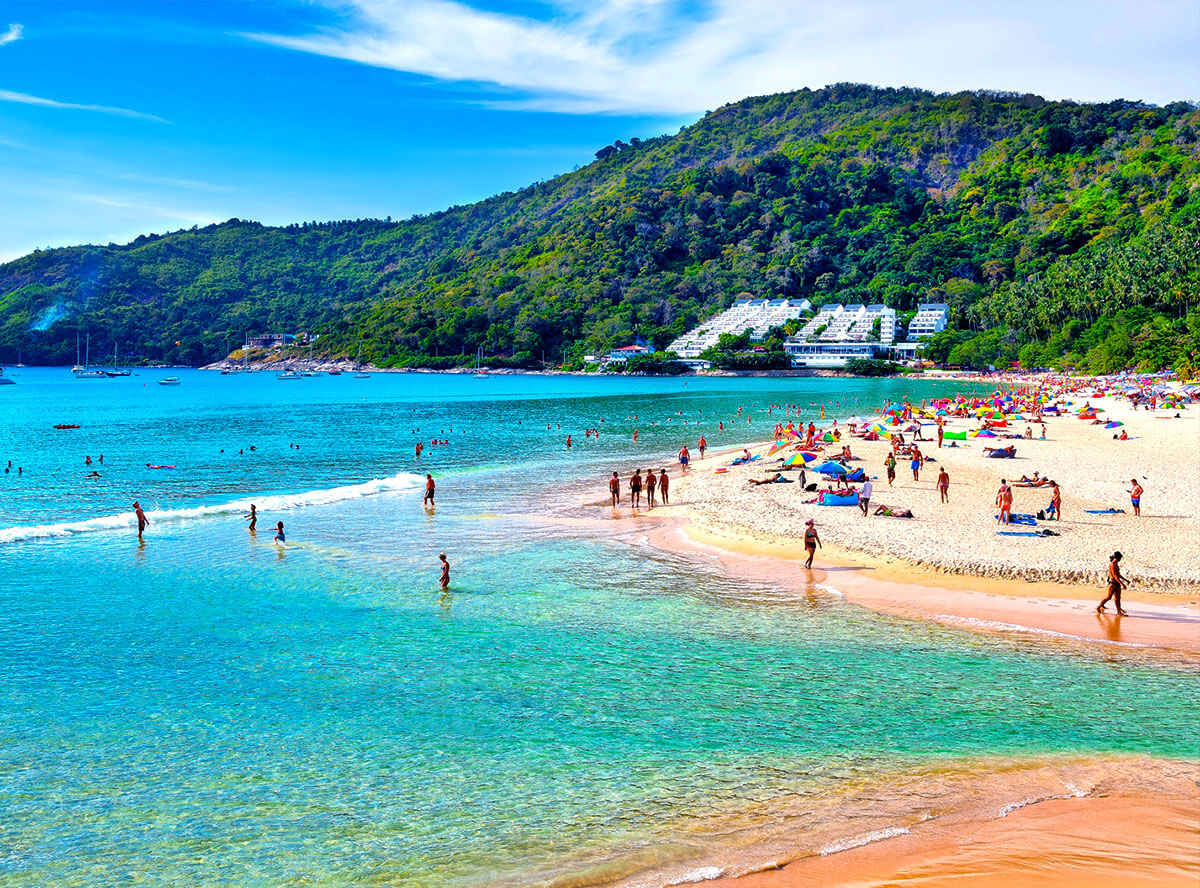 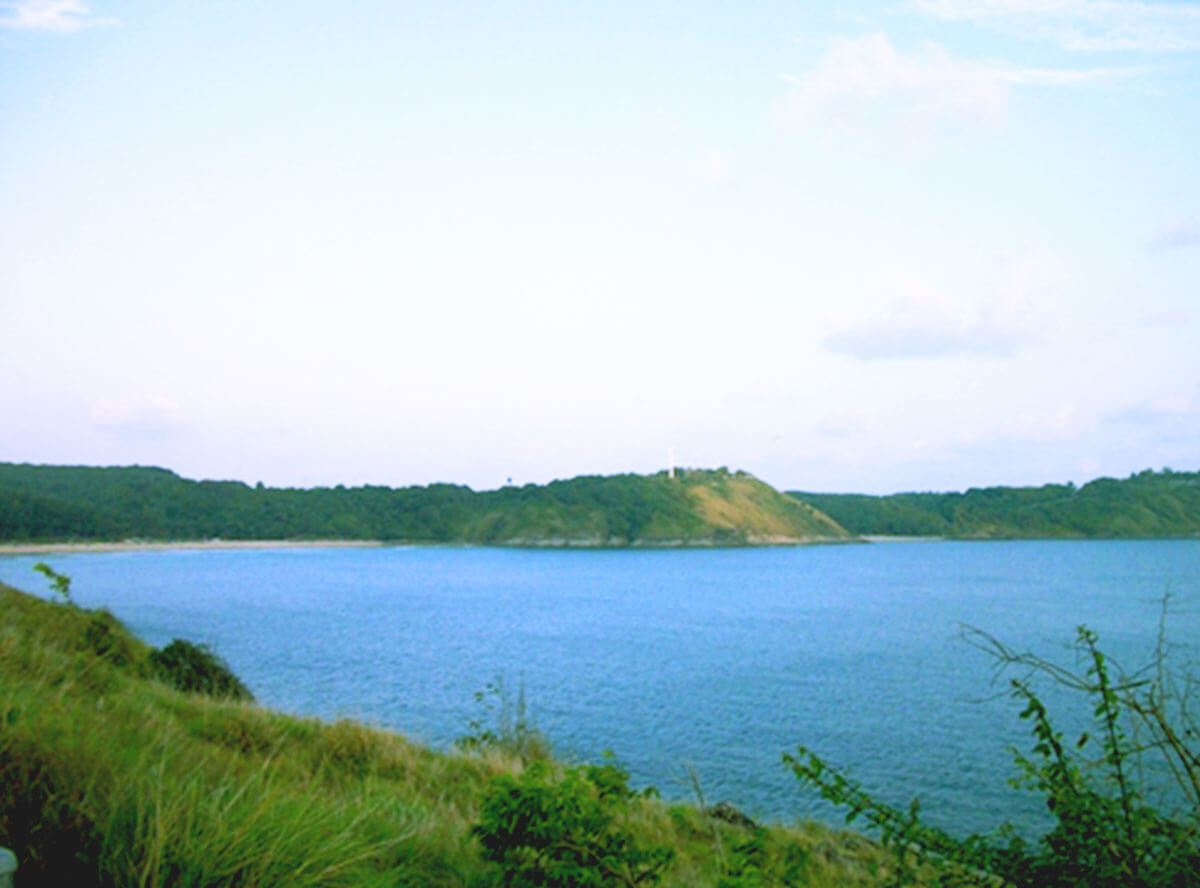 It takes only half an hour to get from the old town. Nestled deep in the far south of Phuket, Rawai holds a certain charm about it with nature in abundance, urban convenience, some wholesome seafood at reasonable prices and great viewpoints which let you witness the majestic beauty of nature.

Not to be missed at Rawai
• Nai Harn

This is Asia’s third best beach of the year 2019!* People of Phuket also seem to think so as well. The area is not too big so it is not that much chaotic so it is truly a perfect destination to unwind. Higher up beyond the beach is the forest, it is pleasant and breezy. There is also a swamp and massive park for the whole family to hang out without crowding. Embraced by greenery, the long laid-back beach is great for a picnic. Head to this chill space if you want to go where the local do.
* According to TripAdvisor

• Ao Sen
From the right of Nai Harn lies an idyllic tiny bay in a walkable distance of 1km away where it is mostly tranquil throughout the year. Dotted with rocks and boulders, the pristine white sandy beach is secluded so you are free to relax with no prying eyes. Although it is harder to reach and not a lot of amenities, you can still find some small to medium bungalows here and they offer diving activities to marvel at the underworld beauty.

• Rawai Seafood Market
In normal situation, Rawai beach is usually packed with tourists due to its lively atmosphere and a slew of seafood stalls which are most concentrated on the way to Rawai quay. Here you could buy fresh local catch at jaw-dropping prices on one side of the road while the vendors on the other side are on standby ready to cook your seafood a la carte.

“Today at Kanjanaphisek Lighthouse on Promthep Cape, the sun will set at…”

That is the announcement of the Meteorology Department which you would be, more or less, familiar with if you tune in to listen to the official weather report on the radio. Every day the exact time of sunrise at Chana Dai Cliff in Ubon Rachathani’s Khong Chiam and sunset at Kanjanaphisek Lighthouse on Phuket’s Promthep Cape would be announced. Promthep Cape is our last destination for sightseeing in Phuket during the daytime.

Promthep Cape is the steep rocky headland that sticks into the sea with lot of palm trees along the ridges. On its top, you could gaze out to the sparkling turquoise sea looking at Koh Kaew Noi, Koh Kaew Yai, Nai Harn, viewpoint at Phromthep Cape Renewable Energy Power Plant and massive white wind turbines. The most iconic vista, however, has to be the breathtaking view of sunset twilight. Despite not being Thailand’s westernmost point, this very tip of Phuket is Thailand’s last spot where visitors could watch the sun go down. Everyone seems to stop caring where that westernmost point is at the fleeting moment when the sun dips below the golden horizon and dramatically unites with the sea. Many claims that this is the most beautiful sunset viewpoint of Phuket and some even go as far as the most beautiful in the country.

• There are two ascent points to get to Promthep viewpoint; either from Rawai Beach or from Nai Harn Beach. It is best to go there before 5.00pm.
• You can walk all the way down to the end of Promthep Cape but be warned that there is no tree shade. It is recommended that you bring along sun-protection gear and that you be careful of wind and waves which could cause accidents. 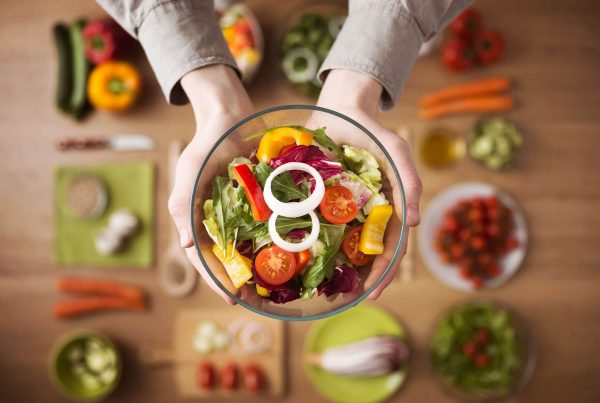 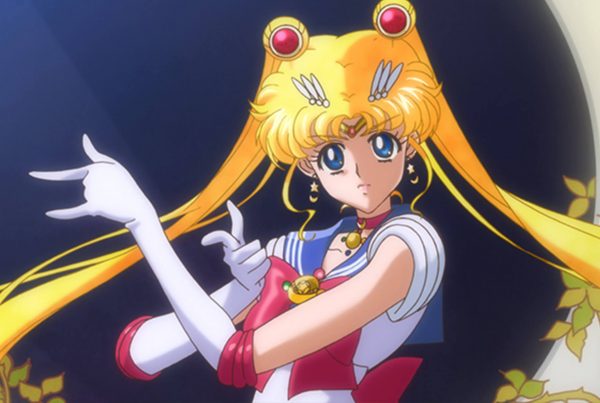 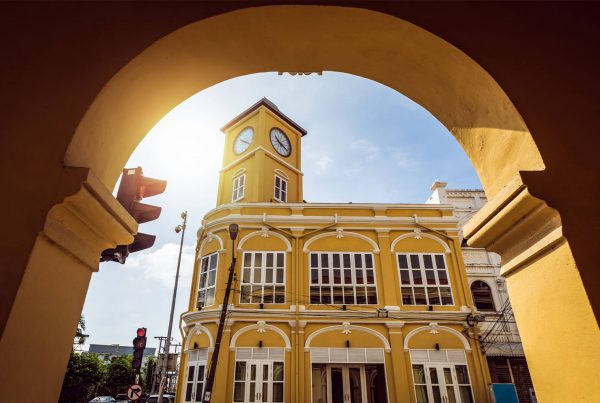 Food & Drinks
A Touch of Epicurean Delights Awaits in Phuket