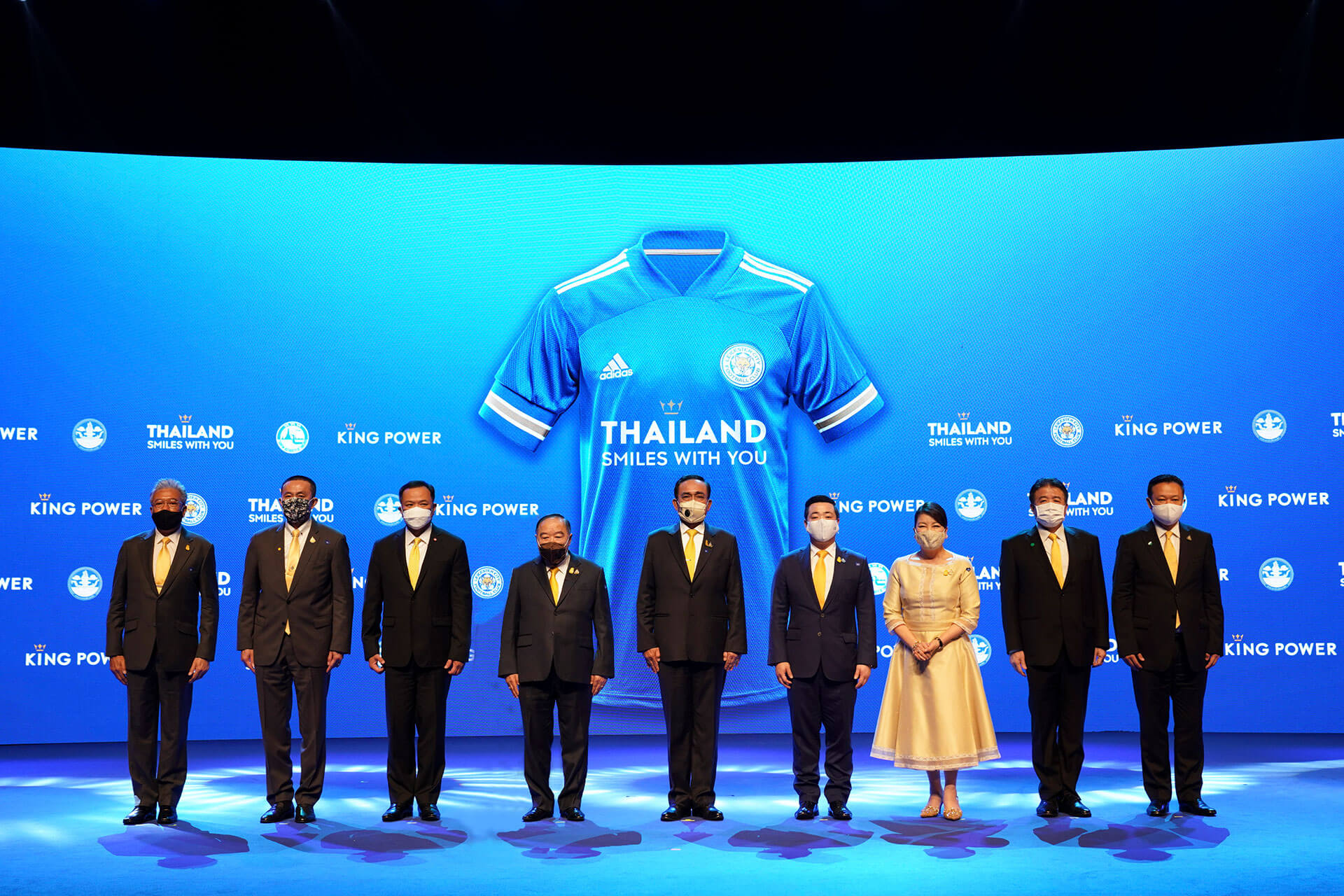 King Power Group, in collaboration with the Ministry of Tourism and Sports, and the Tourism Authority of Thailand (TAT), announces a phenomenal campaign ‘THAILAND SMILES WITH YOU’ #ยิ้มให้โลกให้โลกยิ้ม to promote Thailand to the world through Leicester City FC, a UK premier league team which boasts billion worldwide fans. The campaign highlights ‘Thai Smiles’ as a symbol of support and care which Thai people wishes to send to everyone across the world during this difficult time of the pandemic. This is a long-term campaign aimed to enhance Thailand’s image and help boost the country’s economic well-being through travel and tourism. Presiding over the opening ceremony is General Prayuth Chan-o-cha, Thailand’s Prime Minister with General Pravit Wongsuwan, Deputy Prime Minister, Anutin Chanvirakul, Deputy Prime Minister and Minister of Public Health, Saksiam Chidchob, Minister of Transport, Distat Hotrakitya, Secretary-General to the Prime Minister, Chote Trachu, Permanent Secretary of Tourism and Sports, and Dr. Yuthasak Suphasorn, Governor of Tourism Authority of Thailand joining the event at Aksra Theatre King Power on Rangnam Road. 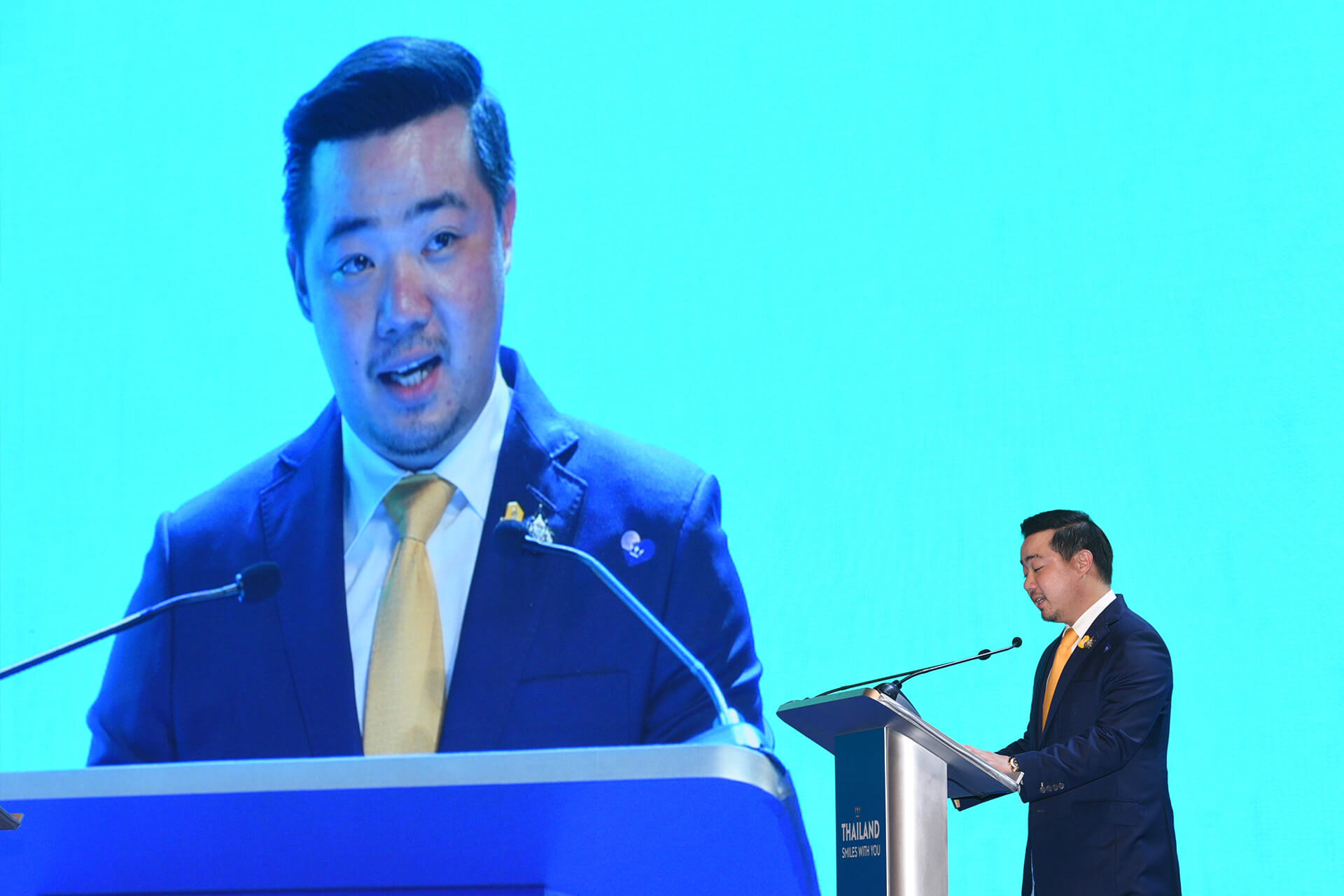 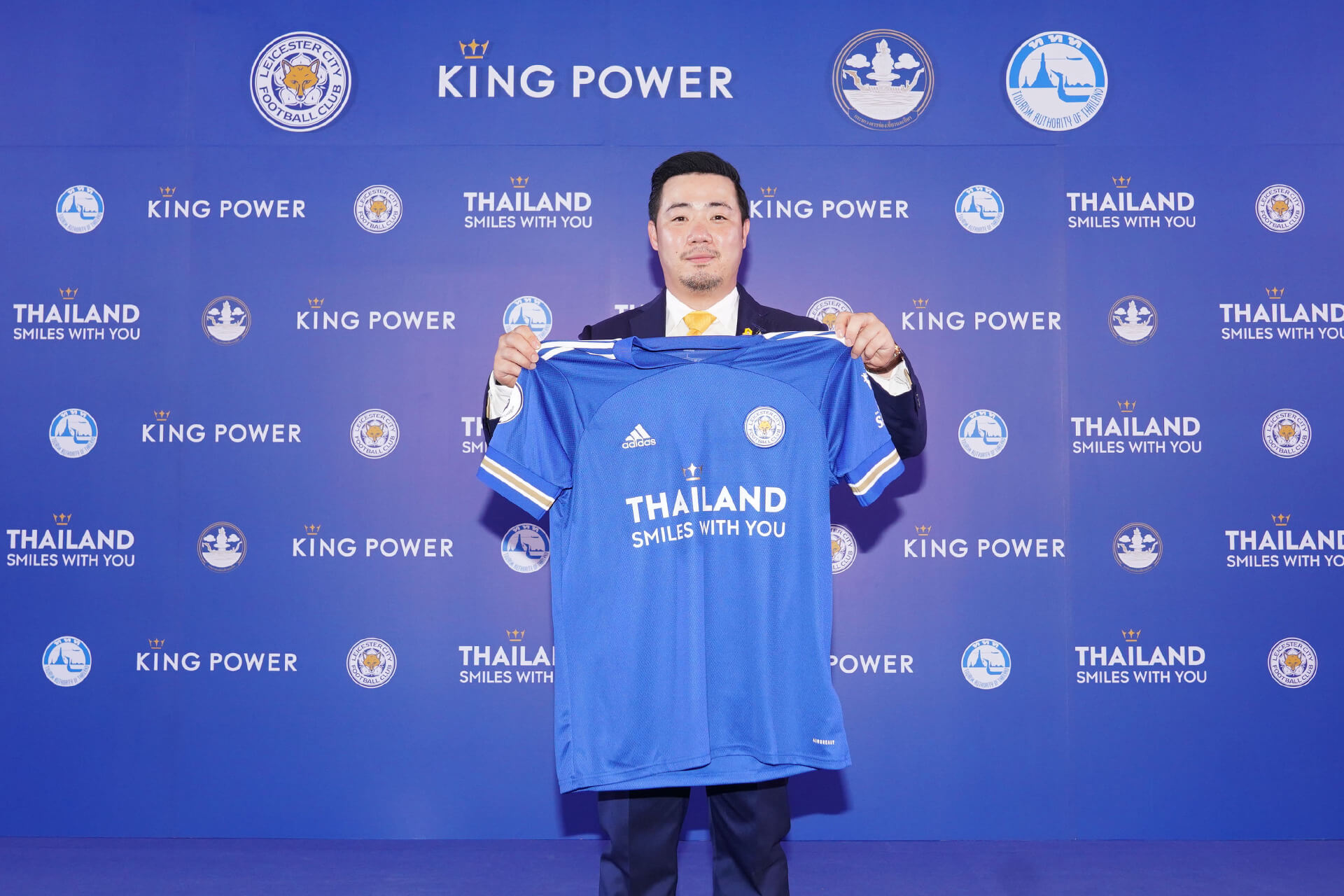 Mr. Aiyawatt Srivaddhanaprabha, CEO of King Power Group, and Leicester City FC Chairman said, “THAILAND SMILES WITH YOU #ยิ้มให้โลกให้โลกยิ้ม is one of the projects King Power Group proposed in the letter replying to the Prime Minister’s call for support and collaboration from private sectors to lessen the impact of COVID-19 faced by Thai people and restore the country’s economic welfare”.

“So far, the government has announced several policies and projects to cope with the Covid-19 pandemic which has brought the world’s economy to a halt and has gravely affected the people’s mental health, socialising, and ways of life. As a Thai and an entrepreneur whose ethics is firmly rooted in social responsibility, we are proud to cooperate with the government in mitigating the adversity and supporting projects that will both directly and indirectly benefit our country’s economic and social well-being, hoping that it will lead us through this crisis safe and sound”. 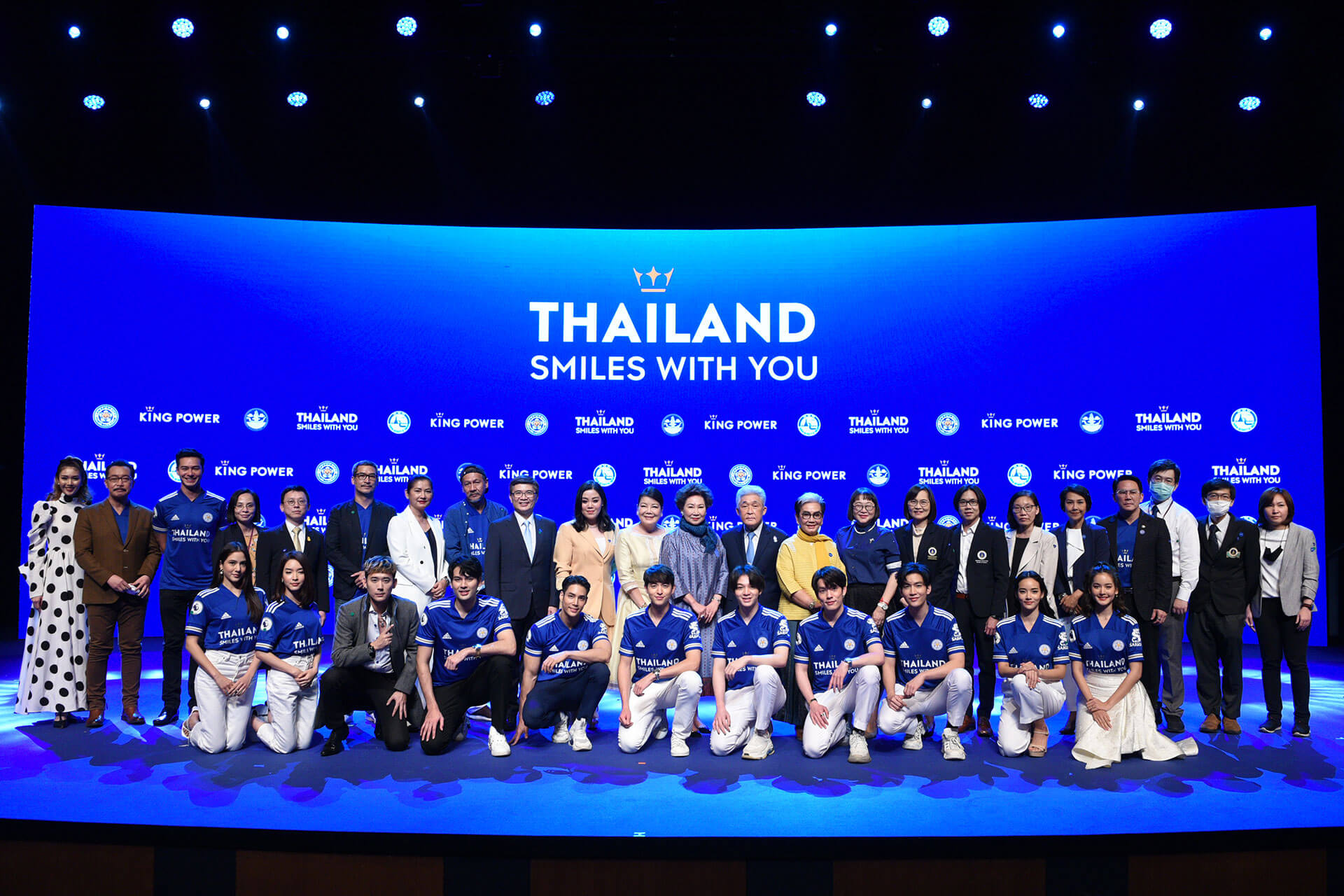 “Thailand remains one of the world’s top destinations for travellers from around the world having the potential in every aspect, especially the remarkable Thainess that is inscribed in the famous ‘Thai smile.’ ‘Smile’ is a unique trait of Thai people. It is also a universal symbol of care and moral support that can be understood by everyone regardless of race, language, gender and age. It is in this belief that inspired us to name the campaign THAILAND SMILES WITH YOU #ยิ้มให้โลกให้โลกยิ้ม”.

This collaborated campaign between King Power Group, the Ministry of Tourism and Sports, and the Tourism Authority of Thailand aims to send care and moral support from Thai people to the world amidst this pandemic crisis through communication channels and platforms of King Power’s Leicester City FC, one UK’s premier league teams. The team’s global popularity is proven by its followers in 212 countries, comprising 643 households, and 4.7 billion viewers. This collaboration marks an important occasion between Thailand, Thai people and Leicester City FC as the world will witness ‘THAILAND’ SMILES WITH YOU’ emblazoned on the LCFC footballers’ jerseys for the first time and throughout the 2020-2021 season!

Mr. Aiyawatt concluded that, “We hope that THAILAND SMILES WITH YOU campaign will leave a good impression and form a cherished memory of the Thais’ friendship in the mind of travellers around the world and above all, reiterate Thainess to the world.”

Mr. Chote Trachu, Permanent Secretary of Tourism and Sports, revealed that, “The COVID-19 situation has severely affected the tourism industry. International travelling has been suspended. Domestic trips have been slowed down. Business owners and the Thai people in general find themselves in this difficult situation. The Ministry of Tourism and Sports, together with the Tourism Authority of Thailand, realises that it is significant and urgent to revise our strategy and materialise the plan to restore the Thai tourism industry. Our participation in the THAILAND SMILES WITH YOU #ยิ้มให้โลกให้โลกยิ้ม campaign with King Power Group aims to send the message of support to the world through the project’s various activities. It will also communicate Thai Smile as a symbol of friendship of Thai people to the world. These are our prominent core value of Thai tourism that has long been attracting visitors from all continents. We are confident that the THAILAND SMILES WITH YOU campaign will show our country’s moral support and friendship to the rest of the world, and hopefully create a good image of Thai tourism in the future.”

On the occasion of presiding over the official launch ceremony of THAILAND SMILES WITH YOU campaign, General Prayuth Chan-o-cha, the Prime Minister said, “THAILAND SMILES WITH YOU is a project that responds to the government’s letter to members of the private sector who have potential to help our country which is gravely affected by the Covid-19 crisis. Drawing from our famous ‘Thai Smile,’ THAILAND SMILES WITH YOU is a good campaign which passes on the Thai moral support to the world in our united fight against the pandemic, with the hope to find a firm footing in the new-normal soon. I am truly pleased that a private sector company such as King Power has given full support to the government to help stabilise the country’s economy by creating a project for the common good. The company’s international network provides a strong outlet to promote Thailand to the world as Leicester City FC which is a top premier league team with billion fans around the world.”

The Prime Minister also anticipates that this project will make the world remember the country’s moral support through the iconic “Thai Smile”, and should act as a medium that attracts people all over the world to visit Thailand when everything is in place and ready. Subsequently, the overall picture of the Thai economy will be improved when travel and tourism resume in the future. 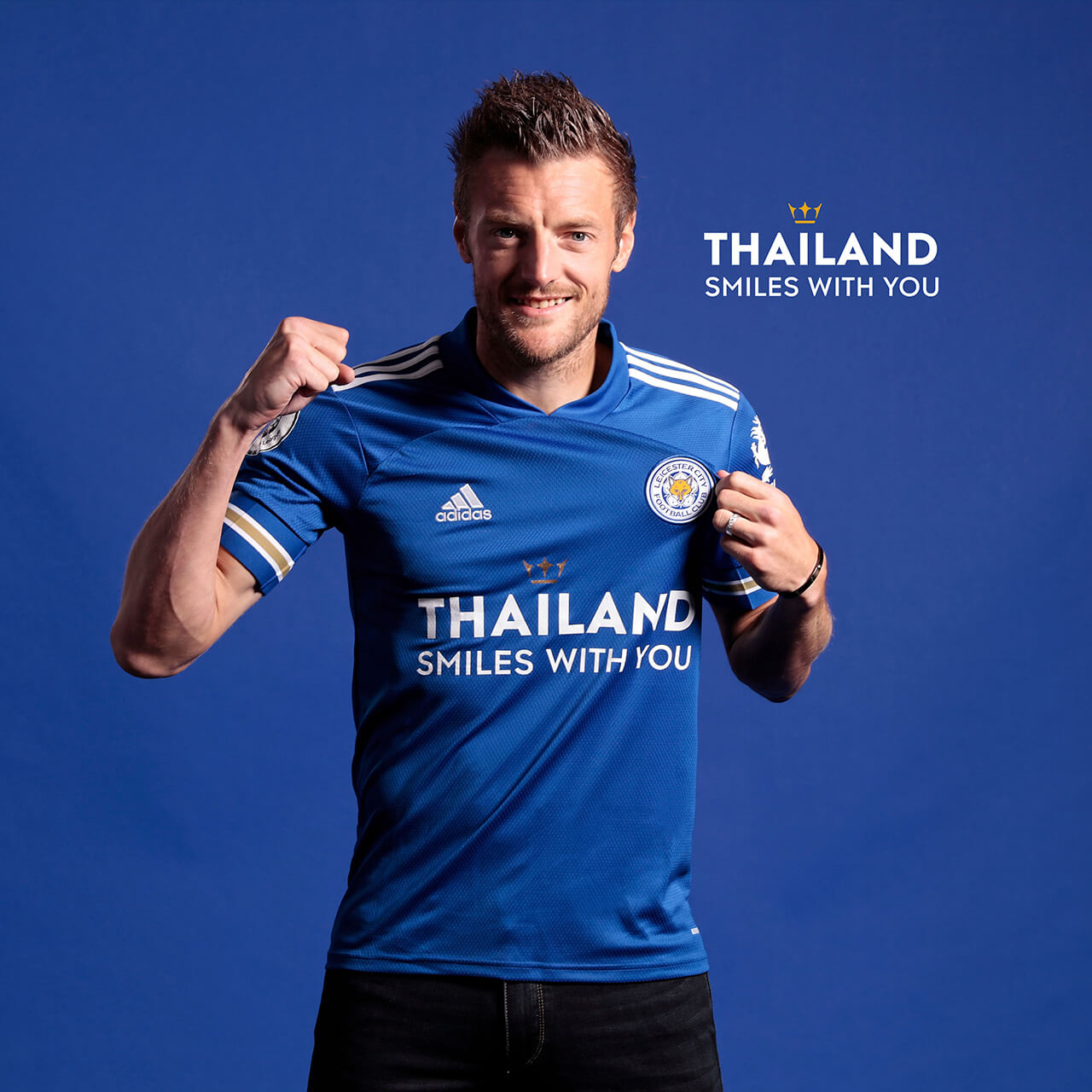 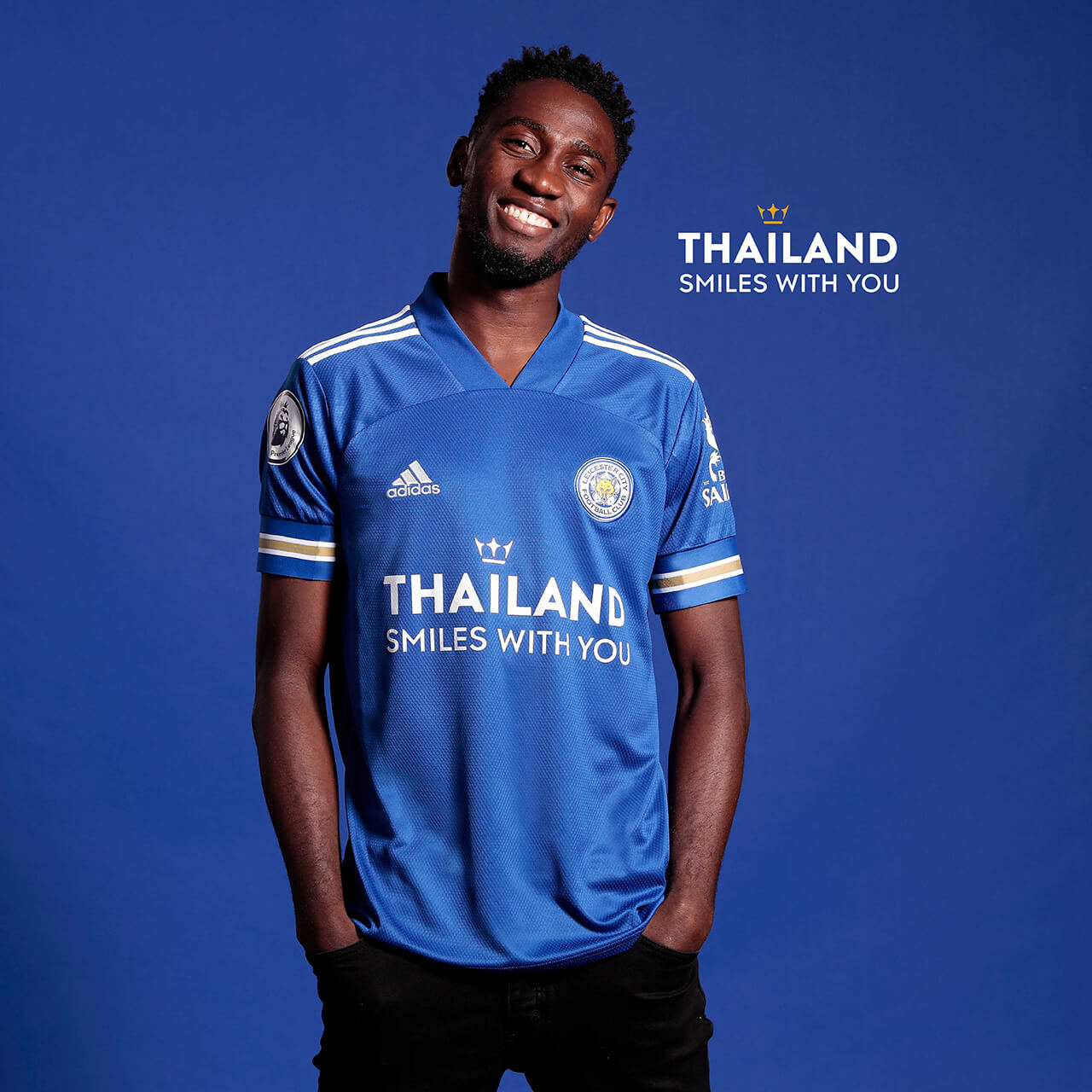 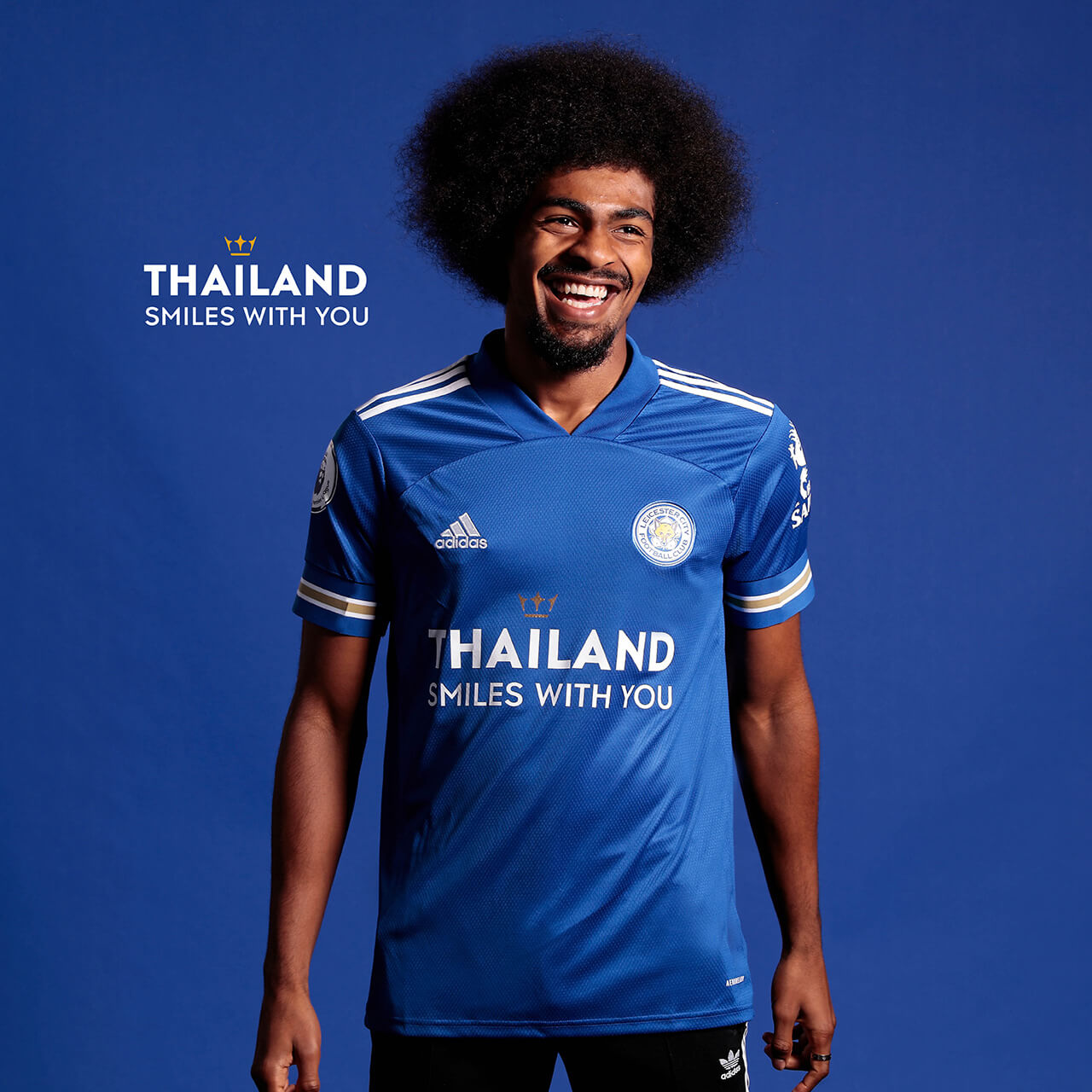 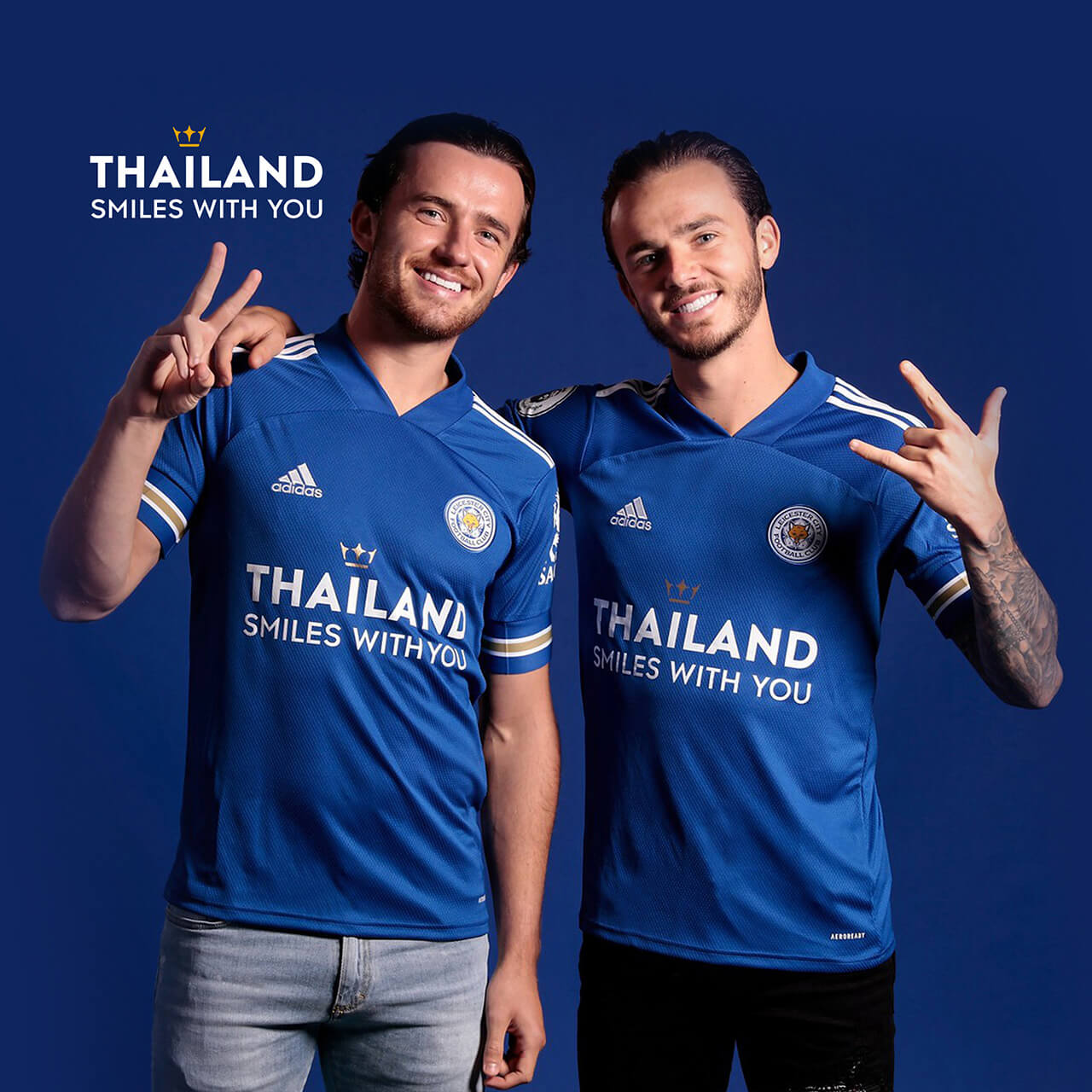 10,000 limited-designed THAILAND SMILES WITH YOU jerseys will be available for sale in Thailand at 2,500 THB each with all proceeds goes to The Faculty of Science and The Faculty of Medicine, Ramathibodi Hospital RNA COVID-19 vaccine development programmes and other COVID-19 vaccine initiatives supported by the Thai government. And for the first time ever, people will witness LCFC footballers wearing THAILAND SMILES WITH YOU jerseys in the match against Manchester United FC on Sunday, 26 July 2020 – which will be world’s premier ‘Jersey for Thailand’ phenomenon. 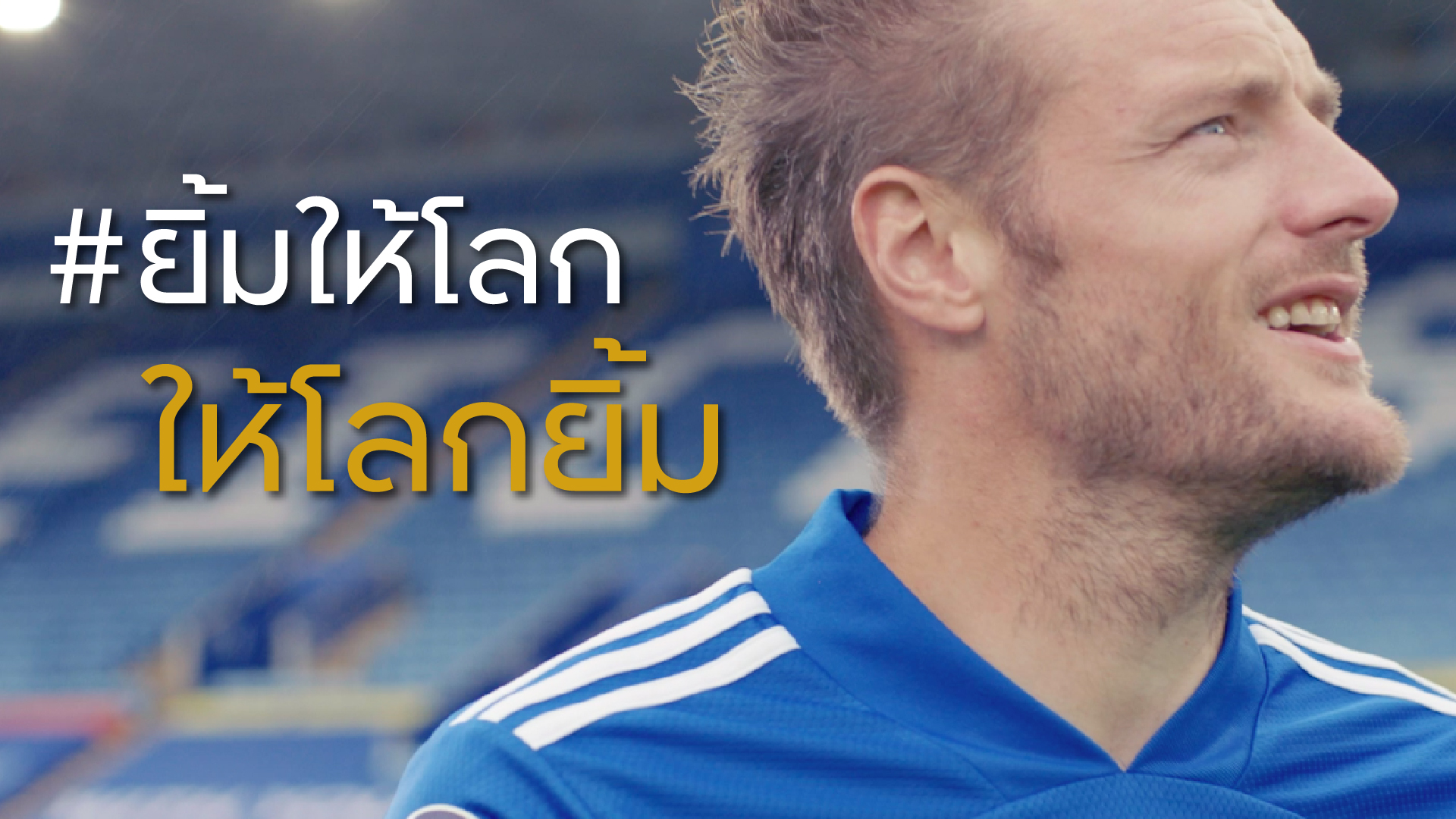 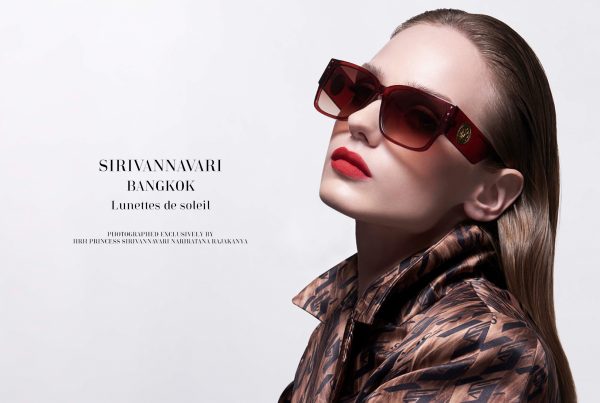 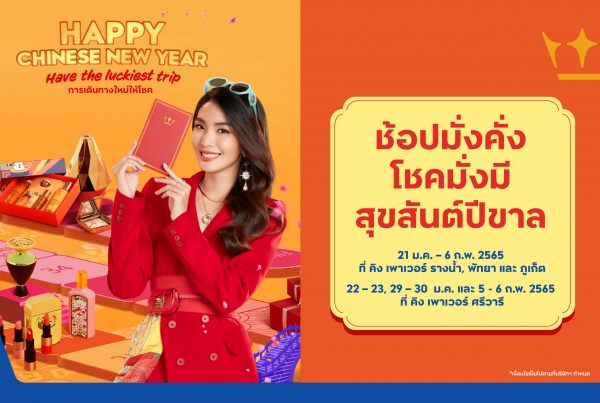 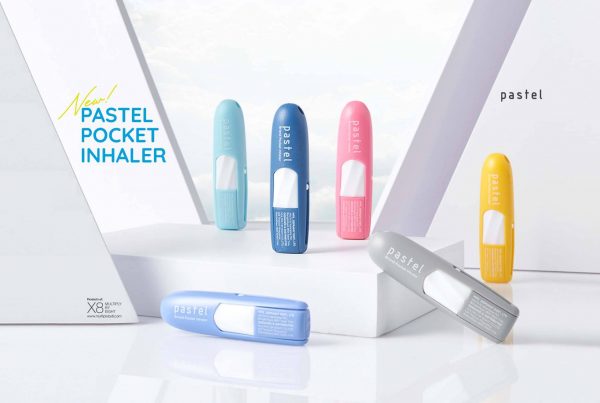